Trip to Lisbon : discover what to see and what to do in Lisbon? 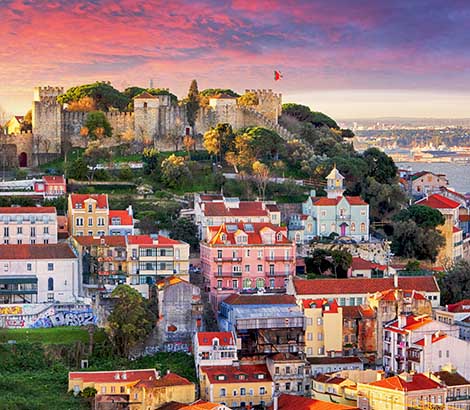 Lisbon is a City of Phoenician origin, who baptized it as Ulissipo. Lisbon means the safe harbor; this city inherited a great Greek and Carthaginian influence; with time Lisbon passed to the Romans, who called it Olisipo. By the year 585, after the fall of the Roman Empire became part of Galicia, until finally by the nationalist processes, Lisbon is the capital of Portugal and its most important city. Discover our proposal to travel to Lisbon to enjoy one of the most beautiful cities in Europe.

Its geographical location: at the mouth of the Tagus River, overlooking the Atlantic Ocean and the entrance to the Mediterranean, made it one of the most important Ports in Europe. From this port came great expeditions towards the unknown America, which made it one of the vital cities during the time of the discoveries and conquest of the new world. So get ready to travel and enjoy a good stay in your Trip to Lisbon.

We'll start by getting to know some of the oldest castles and with more than eight centuries full of stories and tales, set on one of the highest hills in Lisbon. The Castle of San Jorge or Castelo de São Jorge, suddenly as you climb the hill to meet the castle, you might delight in some solitary violinist so that your climb to the castle takes you back to that medieval time. During the 16th century, St. George's Castle reached its highest honor, as it received Vasco de Gama on his return from India after the Lisbon earthquake of 1755, leaving it partially in ruins.

During your trip to Lisbon, the Monastery of the Jerónimos or Mosteiro dos Jerónimos is the most important visit in your stay, which you cannot miss. This monastery dates back to 1501 and was completed at the end of the 16th century. With Manueline influence and was built to remember the passage through India of Vasco da Gama. A curious fact is that in the same place is the church Ermida do Restelo, Vasco da Gama's place of prayer before starting each trip.

Another of the historical icons is the Belém Tower, also in Manueline style, built between 1515 and 1519, which was also declared Cultural Heritage of Humanity by UNESCO in 1983, is very close to the Tagus, was built as a fort for the defense of the city, was used as a port and lighthouse, very close to the Jerónimos Monastery. It has a battery of 16 with cannons; they are five floors of pure Lusitanian History. The viewpoint of Santa Catalina or Miradouro de Santa Catarina, one of the most crowded, as in the afternoon many people gather to share, listen to music or simply to scatter with the views offered by this wonderful place. Its location is at the height of Barrio Alto and Santa Catarina, very close to the elevator da Bica.

The Church of the Jerónimos Monastery is very different from the churches we know all over the world, as it has only one nave. Among the most important places of interest of this church are the two tombs of Vasco de Gama and Luís de Camões.

Another religious attraction is the Cathedral of Lisbon, popularly Sé de Lisboa, the oldest and most important Romanesque art dating from the twelfth century, its real name is Santa Maria Maior. Its style is very similar to the Jerónimos Monastery, but a little smaller. If you go inside you can see many Roman, Arab and medieval remains, product of recent excavations.

A visit to the Plazas, the Plaza del Comercio or Praça do Comércio is perhaps the most important in Lisbon. Built on the rubble where the royal palace was located during the earthquake of 1755. In the past this site received merchant ships, that is why it was called the door of Lisbon. In this square is the Arco Triunfal da Rua Augusta, exactly where Rua Augusta begins, the most important street in La Baixa. The Plaza del Rossio, whose official name is Plaza Don Pedro IV, is the busiest centre in Lisbon. In its surroundings there are restaurants, bars and shops.

The Plaza Marqués de Pombal is located in the most modern part of Lisbon, next to Parque Eduardo VII, at the end of Avenida da Liberdade, here are the most important banks and Portuguese companies and large chains of major hotels in Portugal. When you travel to Lisbon, it would be advisable to walk the streets of this central area by the Avenida de la Libertad, taking a stroll through the Park Eduardo VII, the largest in Lisbon, enjoy one of the most important Green Botanical Gardens in Portugal, the famous Estufa Fría (Cold Stove).

The Puente Vasco da Gama with its 17.2 kms. It is considered the longest in Europe. It is so long that on cloudy days it is impossible to see the other bank. Its name is in honour of Vasco da Gama, the most important Portuguese navigator in the world in commemoration of the 500 years since his arrival in India in the year 1498.

In order for your trip to Lisbon to leave a pleasant taste on your palate, you must not miss the good food offered by this Lusitanian city, its very homemade and traditional cuisine, but with a lot of seasoning. As it is not really a matter of not going hungry, but rather to taste the exquisiteness of its gastronomy, a good cod or codhau, codhau á bras or cod pie, roasted sardines, grilled sardines is the best of the Mediterranean. The Portuguese are masters of wine and cheese; a glass of refreshing green vinho accompanied by azeitão cheese is a delight.

In Alfama neighborhood you can find the best restaurants and Alto neighborhood, having a beer in the mythical Cervejaria Trindade is a must. The Mercado da Ribeira is one of the best places to eat in Lisbon. The beaches of Cascais and Estoril provide an incredible promenade because only half an hour separates one locality from another. On this coastline between Lisbon and Estoril we can enjoy other beaches, such as the Carcavelos beach, one of the largest and most visited throughout the summer. If your trip is possible, a visit to Guincho Beach or Praia do Guincho can be located just 5 kms from Cascais.

Lisbon also talks about Football, Sporting Lisbon, Benfica, Os Belenenses are the teams of the Primeira League of Portugal and especially Lisbon, also in this city lives very passionately the Football, as in the rest of Europe, if you run with luck or plan your trip to Lisbon, to coincide you can coincide with a game of the Portuguese League and why not with one of those famous matches of the UEFA Champions League.

If you plan your trip to Lisbon for one of the weekends in August you could be in one of the most important motor events, you can see live and in person the Grand Prix of Portugal, corresponding to the world championship of Motorcycling at the Estoril Circuit. An unavoidable appointment that you should not miss if you are visiting for that date. To learn more about this peculiar area of the Iberian Peninsula, within your agenda you must take into account a trip to Lisbon.