The 15 most popular museums around the World 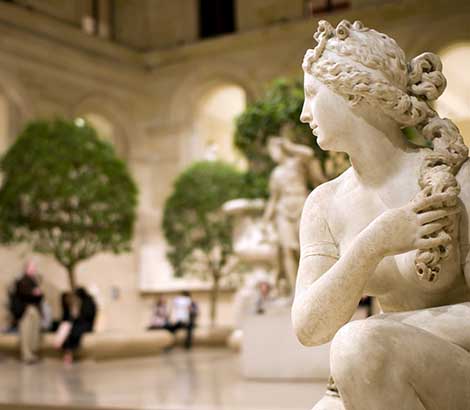 The painting is silent poetry, poetry is blind painting. This Da Vince’s phrase hides a beautiful truth and knowing appreciate the art fills the spirit of joy, peace, creativity and much more. Both for a traveler and for a local is very important and rewarding take the time to explore these magnificent houses of the muses now known as museums and get acquainted with all kind of art and cultures.

Then here you have a few marvelous places and the most popular museums to get inspired and maybe catch your own muse.

This is an impose building which has 19 departments with over two millions of art pieces from the entire world. You can enjoy Dali’s Corpus Hypercubus of Dali, Degas° Tiny Dancer, O'Keeffe Cow's Skull: Red, White, and Blue and see buildings like Dendur Temple which was dismantled to save it from a flood in Egypt and rebuilt by the Met in the 1970s and the Cloisters which are an appendix of the museum dedicated to the medieval art. You can also enjoy the spectacular view of Manhattan from its rooftop and have a drink or a snack in the bar there. There are many of activities offered by the institution even a culinary art tour that provides a delicious menu connected with art and nice conversation. It is ideal for a first date.

This amazing museum contains an intense and distinguished collection, formed essentially by a few art-loving kings, where many works were created on commission. Picasso was the director of it for a while and an imitation of the Mona Lisa is here. There are spectacular master piece made for genius like Velazquez, El Greco, Goya (the most widely represented artist in the museum) Tiziano, Rubens and Bosch, Murillo, Ribera, Zurbarán, Rafael, Veronese, Tintoretto, Van Dyck, Caravagio, Poussin among others. You must go several times to form your opinion of Bosch’s The Garden of Delights and being observed for Velazquez himself or even get scared for Saturn’s crazy eyes.

This is an impose building that holds master piece by Da Vinci, Raphael, Monet, Manet, Tiziano, Picasso, Degas, Rembrandt, Goya, Magritte, Van Gogh, Rivera, Warhol among others. It has a marvelous sculpture garden with pieces by Miro, Burgeois, Lichtenstein and many more. It also offers concerts and films so it is great to learn and have fun.

The museum's collection occupies a complex of six buildings on the banks of the Neva River, the most important of which is the Winter Palace, the official residence of the ancient Tsars. There are paintings of Da Vinci, Rembrandt, Van Gogh, Matisse, Tiziano, Degas, and many more. Legend said that the sculpture of the lion-headed Sejmet goddess, once a year, when there is a full moon, on its knees appears a pool of blood that dries before the first visitor arrives.

This Gallery preserves the best works of art of the Renaissance period. Among the works are pieces by Giotto, Filippo Lippi, Botticelli, Leonardo da Vinci, Albrecht Dürer, Giovanni Bellini, Mantegna, Michelangelo, Raphael, Tiziano, Bramantino, Francisco de Goya, Rembrandt and Guido Reni. You can also see the work of scientists like Galilei and writers like the great Dante Alighieri. Did you know that the model of Botticelli’s Birth of Venus was related with the navigator Americo Vespucci?

Its build is an architecture jewel with a grand dome of glass and steel created by the British architect Norman Foster. There are great Egyptian sculptures, the famous Rosetta stone, the bust of Pharaoh Ramses II the Great; the remains of the Mausoleum of Halicarnaso, several mummies and a room dedicated to Enlightenment full of objects, books and curiosities from the 17th and 19th centuries. Try to observe the famous crystal skull.

The facade of this breath taking built was built of sandstone. It has a rectangular plant, and ends in a dome very high. It is crowned by a colossal statue of Pallas Athena. The interior of the building is luxuriously decorated with marble, stucco ornamentation, gold leaf, and paintings. There are objects of the ancient Egypt, the classic Greece, the ancient Rome and work of Raphael, Vermeer, Rembrandt, Caravagio, Velazquez, Bosch, Klimt and more. When you go there take the brunch, yummy!

It is one of the main archaeological museums in Athens. The old museum was inside the acropolis but due to its small dimensions it was proposed the construction of a new museum of larger size outside of the acropolis. In the Parthenon Hall you can find some of the objects of greater value and the Caryatids, sturdy statues representing beautiful priestesses who acted as columns in the Erechtheion building. Get a komboloi and relax.

The ROM contains about six million items and more than 40 galleries. It has an important collection of dinosaurs, African and Middle Eastern art, East Asian art, European history and Canadian history, also minerals and meteorites. It owns the collection of fossils of the biggest shale of Burgess of the world, with more than 150 000 specimens. It has an area called Hands on Gallery which is for children explore artifacts and play with world dress and puzzles. Really fun.

The Vatican Museums are the galleries and the set of estancias of artistic value owned by the Catholic Church and accessible to the public. There are paintings from Medieval Age until XIX century. Some authors you can find are Caravagio, Gioto, Raphael, Perugino and Da Vinci. It also has sculptures like the Laocoonte Group, Egyptian mummies, the carriages pavilion, the Raphael’s rooms and the helical ladder. Did you know that Michelangelo’s painting The Creation in the Sistine Chapel, represents exactly the human brain?

The museum is structured in a lively and well-organized way, mainly with dioramas thatgive the opportunity to visitors to discover the world and the history of dinosaurs visually. There are also numerous reconstructed fossils and complete skeletons, plus a museum area where you can see how scientists work by cleaning fossils and preparing them for future exposure. It also shows several funny dinosaurs sculpture for the Jurassic Park lovers!

This exquisite edification was built around the pieces of art which imprints it more architect value. It has 3 museums at the same time and you can enjoy the Altar of Zeus of Pergamon, the Roman Gate of the market of Miletus and the Gate of Ishtar. If you want to go there, you must wait until 2019, because it is being refurbished.

At its facilities were the headquarters of National Socialist terror, the state's secret police (with its own jail), the SS leadership, the SS security service and the central security headquarters of the empire. From this place was articulated the persecution and extermination of political opponents of National Socialism at home and abroad, and organized the genocide of European Jews, Gypsies and Romans. It has 15 informative stations in the enclosure and another exhibition that is realized from spring to autumn along the remains of the naked wall of Niederkirchnerstraße. Three of the 7,000 former employees of the former "terror headquarters" were also convicted.

This beautiful museum keeps the largest collection of objects from the time of Ancient Egypt; it has more than 120,000 objects. Did you know that the only organ that the ancient Egyptians left inside the mummy was the heart because they considered it the center of intelligence and emotion, qualities that the dead would need in the other life as well?

This is the most visited museum of the entire world. Its extensive collections are the result of a double historical effort:  the collection of the French monarchy over several centuries and the work of the men of the Enlightenment, precursors of the French Revolution. This awesome former palace protects master pieces of many authors like Da Vinci, Michelangelo, Caravagio, Goya, Rembrandt, Raphael, Murillo and more. Its crystal pyramid made for Ming Pei was the stage where the latest French President Macron gave his first speech. You must go see the Hammurabi Codex, smile to the Mona Lisa, give a high five to the Milo Venus, stare into the eyes of de women in the Victory of Samothrace sculpture and find out if the Martin Drolling painting is made with blood of a human heart.

You already decided to catch your muse, you need to be connected every second of your trip. You will need to find a reliable internet access. My Webspot offers Pocket WiFi with 4G speed, which will ease all your online operations. It has an 8 hours battery life, five people can be online at the same time. All of the places listed here are available with this service and you My Webspot will deliver it to the place of your stay all over Europe. Now then, if you need to be online to share the Mona Lisa’s smile, the cheapest and safest way is getting the Pocket WiFi from My Webspot.