WIFI IN IRELAND : Your travel options connected to the Internet in Ireland 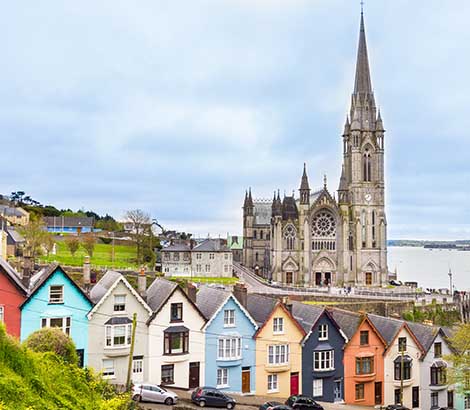 Travellers are not well aware of the benefits and benefits of renting connectivity devices, such as a portable wifi or pocket device, during their stay in Ireland's major cities. But one thing is certain: it is a concern for travellers to stay connected abroad with their mobile by means of a secure and stable wifi. In Ireland the portable or Pocket wifi is the best solution to avoid instability in data flows without interruptions. The portable wifi provides the user-traveler a constant and safe connectivity everywhere, besides allowing him to avoid an excessive consumption of data by the entry of a foreign call at the time of being connected sending and receiving data. Here are some solutions for wifi in Ireland.

In the Irish capital and in the rest of the major cities, 1000 inhabitants have 4G LTE coverage. The mobile Wifi connection in Ireland gives you the great advantage of staying connected at all times and almost everywhere with high speed Internet, thus improving your travel experience.

These are the 4 options available to be always connected to the Internet during your trip to Ireland.

THIS IS THE POCKET WIFI FOR RENT IN IRELAND

The most reliable and convenient solution as you pass through Ireland is the pocket wifi for mobiles. This is a very practical and comfortable device, small enough for you to wear in one of your shirt pockets. This portable wifi device can cover an area of up to 15 meters around the main user, connecting at the same time 10 computers or devices such as: Smartphones, Tablets, Computers and Laptops, giving the traveler the opportunity to enjoy access to 4G LTE and unlimited use of data consumption, which allows you to take full advantage of the performance of this portable device. When you are connected to the 4 G-LTE network, the download speed can reach 100 Mbps, and the upload speed can reach more or less 40 Mbps; the battery autonomy will be 8 hours.

These great advantages are important to compare the efficiency of mobile wifi rental, among the available, but also allows us to make differences with other options for mobile.

In the United Kingdom as well as in Ireland and its main cities Dublin, Belfast, Derry has a very good 4G coverage. The importance of mobile wifi pocket devices is that when you are no longer visiting these big cities, it is very important that the pocket wifi can keep you connected with optimal coverage to all cellular network providers throughout Ireland.

Pocket wifi rental in Ireland is and will always be the great solution for all travellers. With the best data packets at 4G LTE speed. MY WEBSPOT offers you in Ireland the same 4G LTE coverage as the rest of the world, with unlimited Internet access, and a great pocket wifi for your stay.

The free wifi in Ireland is one of the alternatives for travelers to stay connected, for its condition of being free and free. The public wifi network in Ireland is accessible only in major cities, the most important in terms of population, so wifi cybercafés become those spaces that tourists frequent when connecting because in large cities are easier to locate. But both in Ireland and in any other country in Europe, as is customary with cybercafés, when you need to consult information, it is almost impossible to get the password wifi unless you ask for a service or something to drink or eat. In other words, free wifi is not so free.

In Ireland some public wifi access points are certainly free. The complicated thing as in the rest of Europe is to find some free wifi access map.

One of the big problems facing free wifi in Ireland as well as around the world is the quality of its speed. The most uncomfortable thing is the slowness of access to wifi, since for business travellers, it doesn't seem like a good idea to use it. Another problem that the thousands of tourists who visit Ireland have to face is the risk of being victims of an attack of computer piracy, generating a climate of insecurity especially in the most important airports and areas with a lot of public affluence.

Another limitation that puts travellers in trouble is that if you are out of the big cities, it will be almost impossible to find a good free wifi connection.

In all the countries of Europe, the main providers of mobile networks will always ask you for an account containing a local address in Ireland, so that with your registrations you will be given a local data plan accessible in that country. The prepaid card in Ireland for travellers is very common and practical to use.

Many agencies and network providers have specialised in dealing exclusively with travellers using the prepaid card in Ireland. Internet use with prepaid cards is very different from free wifi or pocket wifi. The prepaid card will allow you to make local, rather than international calls, offering poor quality mobile Internet with low speeds below 3G and 4G LTE, showing that such data packages with prepaid cards are very low, compared to the rental of wifi pocket.

The main difficulty with the prepaid card is that you need to be sure that your mobile phone is compatible with the frequency bands available in Ireland. At the end of the road, frequent traveler is very disappointed with the use of the prepaid card because it is not useful because it is not compatible with your mobile, so you will have to put it in your living room as a nice "souvenir" of your trip.

One of the services that is probably the poorest mobile Internet option for travellers in Ireland is the Itinerant Data Service. The problem is that some Roaming providers and service providers will charge you 2 Dollars/Mb knowing beforehand that in general a traveller uses a total average of 800 MB/day. Many travellers ended up paying bills well above the fixed plan for roaming data after 2 months of their stay in Ireland, so be careful because this could happen to you.

By activating this data, you submit to a price rate that is clearly higher than the mobile internet rate in your home country.

You must be very careful with your mobile operator, who may be offering you an international data plan for Ireland, under a deceptive offer, as it is very expensive and once the use of allowed data is finished, you will return to the full rate again, without any warning.

We hope this information will help you learn more about wifi in Ireland.