Sightseeing of Istanbul: A guide of the best places to see in the city 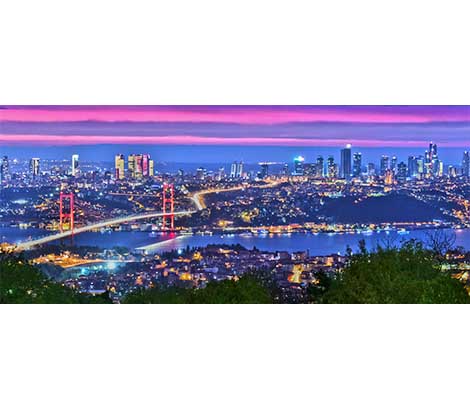 Istambul today has a multitude of things to see and wonderful places. With My Webspot, enjoy high-speed Internet anywhere during your trip.

Go to Istanbul with the My Webspot wifi pocket. And discover the sights of Istanbul.

Istanbul between Europe and Asia.

Istanbul, formerly Constantinople and Byzantium, has in its history marked the presence of the Great Roman Empire in this Eurasian part. It is the largest city in Turkey and its center of greatest economic, cultural and social movement.

Located where Europe and Asia meet, it is the only city in the world that makes life on two continents. Contrary to what everyone thinks, Istanbul is not the capital, it is officially Ankara. But Istanbul carries all the weight of the industrial, commercial, cultural and tourist development of the whole country. Added to this, its majestic beauty left its historical legacy as a testimony of its greatness. It was one of the most developed and important cities of the Roman Empire. That is why Istanbul is today one of the most fascinating destinations on earth.

The contrasts of its people, its way of life, its customs, its gastronomy and even its religion meet there. Remaining to the subjectivity of the visitor, to live the city without paying attention to appearances, since Istanbul will seem very Western to you to be in Asia and too Eastern to believe that it belongs to Europe. What is magical and marvelous about it is precisely that in the world you will never be able to live one of the most chaotic experiences because of the contrasting and genuine that you will be able to understand, because Istanbul is one of the most visited cities in the world.

On your way through this Eurasian city or European Asia you can be in front of a church or a mosque or a synagogue or a palace, in such perfect harmony that you will want to come back every year to let yourself be trapped and enchanted with all the sights of Istanbul.

Sultanahmet is one of the neighborhoods you should not miss, because it is precisely here that the vast majority of the monuments are found. The Blue Mosque, Hagia Sophia or the Topkapi Palace, although it will not be the only thing that you will see in your walk through this spectacular City, since as you enter and let yourself be carried away by the captivating of its splendor, you will see more churches, other palaces and many mosques full of magic, like the New Mosque or the Ortakoy Mosque, with its impressive facades and a holy silence in all its interior.

To enjoy a trip of pleasure, in a cruise by the Strait of the Bosphorus is the most relaxing and pleasant thing that you can experience, the experience of the Turkish baths or to go of stroll and to buy some souvenir in one of its great bazaars, to be left to take in the night, not before experiencing a Turkish sunset in front of the Sea of Marmara.

It is quite difficult to find any city with the tourist places of Istanbul, as these have no comparison, in terms of its great History, the multifaceted culture, art and religion that no other city in the world can offer. But above all the most outstanding are all the experiences and events that took place here. This once capital of the Ottoman Empire is the only frontier city on the planet, which will make you live a unique experience, since having one foot in Europe and the other in Asia will not only be literal. But it will also be physically the only place on the planet where you can do this; evoking to give flight to our imagination, because being in Istanbul, it will be like being between Christianity and Islam, between West and East or between an unforgettable past and an overwhelming future.

The Blue Mosque, or Sultan Ahmed's Mosque, which was built by Sultan Ahmed I between 1609 and 1616, the Blue Mosque is the most famous mosque in Istanbul. It was built on the site of the former Imperial Palace of Constantinople. In its interiors, the celestial tiles of Iznir give a spectacular decoration. Their impressive beauty highlights the ceramics, the small lamps that hang from the ceiling. Sultanahmet and its Grand Bazaar, which you will not be able to resist the temptation to visit and buy, and to finish this tour, admire the Basilica Cistern, one of the more than sixty that existed in Constantine's time.

Hagia Sophia or Aya Sofia the best known of the tourist sites of Istanbul, a jewel that has passed the history of the city for more than 15 centuries. Byzantine work, restored with the original decoration after centuries of concealment, what is most astonishing about its interior is its impressive dome 55 meters high and 33 meters in diameter; walls, pillars, pendentives, galleries, altars and mosaics.

Sitting on a hill overlooking the Sea of Marmara, is the Topkapi Palace, synonymous with the maximum splendor and beauty that reached Constantinople. The sultans in turn, settled their power and imperial domain from this Palace until the mid-nineteenth century. Today it is the Topkapi Palace Complex, a Great Historical Museum, whose faithful witness is the Bosphorus Strait. Watching the Istanbul sunset while in one of the rooms of the Palace is an incredible experience, it is a fantasy.

Other visits to which you must dedicate time are; the Basilica Cistern or Submerged Palace considered as one of the tourist places of Istanbul that more like.

La Colina de Gálata, is practically a complex to which you can reach on foot, vehicle or tram or crossing El Puente Gálata, through its 490 mts. in length, which joins the old and modern Istanbul. Later you will come across the Galatian Tower built in the 14th century by the Genoese of Constantinople, a beautiful circular tower 65 meters high, which according to history was taken by Sultan Mehmet II when he conquered the city. This Galata Tower is one of the oldest towers in the world.

The Church of San Salvador in Chora has been declared as the best Byzantine art architecture in the world. Gülhane Park, an excellent place to relax and socialize a few with the inhabitants of Istanbul. One of the few buildings in the very western style was the Dolmabahçe Palace, was the official residence of all sultans from 1856 to 1924, replacing the Topkapi Palace. The Taksim Square is the great epicenter of modern Istanbul, is more important center of trade, tourism and leisure thanks to the presence of its restaurants, cafes, shops, hotels and lodgings.

Talking about all the beauties and experience of living a thousand and one nights in this Exotic and Magical Eurasian city, would not be much and time would not be enough to describe it in its full splendor, so the invitation to visit the best tourist sites of Istanbul, is the best advice for you to experience what it means to live a few wonderful days in the most spectacular city of the Planet.

We hope you enjoy your stay and that we know more about the tourist places of Istanbul.