Mobile Internet in the United States: 4 Solutions to stay connected on holiday 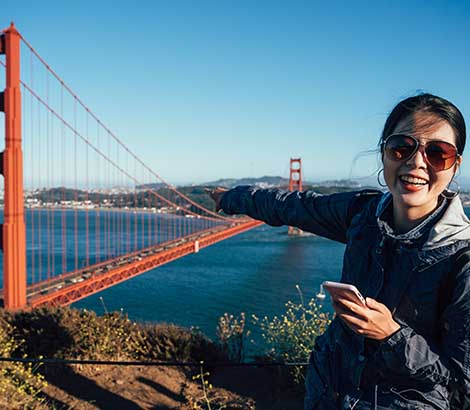 Renting a pocket wifi in the United States is the best way to stay connected to the Internet during your holidays.

The mini router is not yet widely used in France, but it is essential for European travelers who need to use the Internet when travelling.

The wifi hotspot allows you to have mobile internet access in the United States.

The portable wifi for the United states sis convenient for its mobility, in fact its size and light weight allow it to slip into a pocket. He accompanies you from everywhere during your activities or outings during your trip.

The mini router sends a wifi signal up to 15 meters around it and allows more than 10 devices (computers, tablets or smartphones) to connect at the same time. The connection speed offered by handheld wifi is the fastest in the world with a speed of up to 100 Mb per second in 4G LTE.

But it is interesting to note that the wifi hotspot will also be able to connect, in smaller cities, through American mobile network providers, so that the coverage is optimal throughout the country.

With MY WEBSPOT you can rent a wifi router for the United States. Pocket wifi is available from 6.40 Euros per day. It offers unlimited access and very high speed with 4G LTE.

Free Wifi in the United States

Free wifi in the United States is a solution that travelers often adopt to stay connected to the Internet during their holidays. However, the quality of wifi is very poor and connection breaks are frequent.

Some actions on the Internet can be very complicated to do, such as sharing photos on social networks or starting conversations on Skype.

Concerning New York, you can consult this site to find the sites where free wifi is available.

You will notice that most of the free wifi offered are in cafés or hotels and therefore, a minimum purchase will be required to get the wifi code.

The biggest problem with free wifi in the United States is undoubtedly related to the fact that the connection is not secure and therefore exposes you to hacker attacks, which usually wait for their plugs in public places.

Mobile network operators require a bank account and a local address to obtain a prepaid SIM card with an Internet package.

The main American providers such as AT&T, Verizon Wireless or T-mobile offer packages adapted for travelers, with packages including local or international calls and Internet access.

However, the quality of the Internet connection is average, offering only 3G speed, which is 10 times slower than the 4G LTE offered by My Webspot's pocket wifi.

In addition, by using a prepaid Sim card for the United States, you will become unavailable on your regular phone number. Don't forget to check that your phone is compatible with American frequency bands, as many are not.

Foreign data in the United States

This service, called Data Roaming, is generally quite expensive. It is important to remember that fees can rise quickly and become prohibitive.

These charges may accumulate as soon as you leave your phone on while travelling outside your home area, as data may be sent or received automatically.

This is the solution that must be avoided at all costs, many customers have received invoices of around 30,000 or even 50,000 Euros. Be careful and do not be the next customer to be misled by their mobile network operator.