Mobile Internet in Spain: Stay connected during your trip 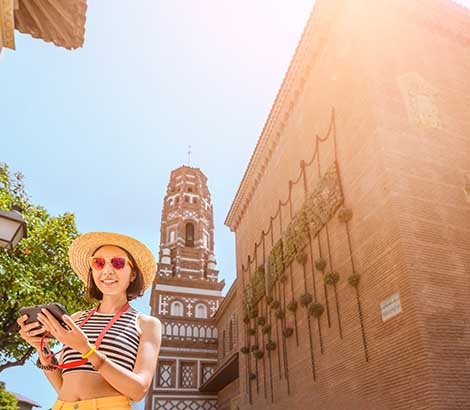 Renting a wifi hotspot is the solution that offers the most advantages to stay connected to mobile Internet in Spain.

Wifi hotspot is also called by some: portable wifi, mini router, wireless router or pocket wifi. The mini router is increasingly being used and is becoming indispensable for French travellers travelling in Spain.

Portable wifi is an innovative and practical solution to travel all over Spain while having a 4G Internet connection (download speed 100 Mbps). The handheld wifi offers a 15-meter wifi network around it and allows more than 10 devices (computers, tablets, smartphones) to connect at the same time.

It is also very easy to use, in fact you will just have to turn it on so that it automatically connects to the Internet.

In Spain, major cities such as Madrid, Barcelona, Valencia, Seville, Cordoba, Palma, Bilbao or Las Palmas provide full 4G coverage. But when you leave these large cities to reach cities in the hinterland, your mini router will adapt by connecting to the various local networks, thus ensuring optimal coverage throughout Spain.

Renting a portable wifi in Spain with My Webspot is the safest and most efficient solution for travelers. It is available from 6.40 Euros per day, for unlimited and ultra fast 4G LTE access.

Free wifi in Spain is a cost-effective solution to stay connected to the Internet during your trip. However, the quality of wifi is very poor, which will prevent you from performing some actions such as sharing photos on social networks or video calls on Skype.

Concerning Madrid, you can consult this site to find out where free wifi is available. You will notice that most of the free wifi is located in cafés or hotels, so a minimum purchase in these places will be required to get the wifi code.

The biggest problem with free wifi in Spain (as in every country in the world) is that the connection is not secure and as a result, you become very vulnerable to possible hacker attacks, who love to crack down in public places.

It is generally complicated to obtain a prepaid SIM card with internet subscription included in Spain, as providers require a bank account and a local address. Some suppliers such as Movistar, Vodafone or Orange have specialized in travel.

Packs are available including local or international calls and internet access, but the quality of the connection is average and only offers a 3G package, which is 10 times slower than My Webspot's 4G LTE connection with its pocket wifi.

The prepaid SIM card in Spain also reveals some other disadvantages such as not being able to be reached on its usual number and the possibility that it may not be compatible with your phone, which is a fairly common problem.

Data abroad or Data Roaming as some call it. This consists in using your package to connect to the Internet. Take the time to inform yourself on the different forums before choosing this solution, because it is very risky!

A lot of people have received invoices with staggering amounts. So don't be fooled by your current provider who will try to sell you a data pack for mobile Internet in Spain.