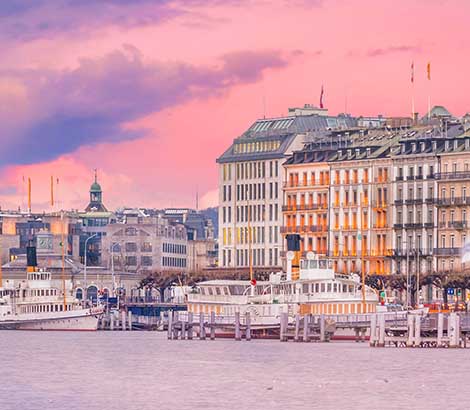 Geneva, the best-known Swiss city in the world

In Switzerland, one of the most international cities in the world can be found between the nearby Alps and the Jura mountain range. It is Geneva, as both the UN and the International Red Cross are based there. From here all humanitarian aid to the rest of the world is planned and implemented.

Geneva has a French language and tradition, although people speaking German, Italian and Spanish can be heard very normally in its streets. It is considered as one of the European cities best founded by its humanitarian tradition and with a cosmopolitan city style, with the best quality of life on the planet. That is why it is called the Capital of Peace.

Jorge Luis Borges, a writer from Buenos Aires, who lived and died in this city, dared to say: "Of all the cities on the planet, of the diverse and intimate homelands that a man is looking for and deserving in the course of his travels, Geneva seems to me to be the most propitious to happiness". Even without knowing the great beauty and culture that this city would reach. This great writer was anticipating what would really be the Great Geneva, silent and bohemian.

Like all Swiss cities, the cosmopolitan and the traditional are highly united with the historical idyllic landscape that surrounds it. So in this trip we are invited to enjoy all the charms and wonders that Geneva can offer us today.

Although Geneva is not the capital, is better known in the world than Bern, not all cities can boast to be cosmopolitan and are also made up of a significant number of foreign inhabitants, who came here as one of us. In condition of tourists, but that the charm of this wonderful city adopted them staying forever.

Looking back over history, we are reminded that Geneva maintained for almost four centuries a Catholic Bishopric in its bosom until the arrival of the Reformation, becoming one of the bastions of greatest importance and influence in Protestantism in Europe. The Reformation contributed greatly to its economic, cultural and scientific development.

It was not the Swiss who invented the cuckoo clock. It was really their neighbors; the Germans. During the Second World War, many shelters for peace were created. This is what led to that particular, quiet, calm and different way of life that you feel in Geneva. Whose historical center offers us any quantity of spaces like; squares, terraces, balconies and where to enjoy the sun in the mornings, it is almost an obligation.

Jean Jacques Rousseau was born in Geneva, in a small mansion of the Grand' Rue, the beautiful main street of the Vielle Ville. The Empress Elizabeth of Austria also had her last breath in Geneva. Sissi as she was called by everyone, next to the pier, in front of the Hotel Beau Rivage, where the bed occupied by Sissi during her visits to her beloved Geneva is now proudly displayed.

Geneva and the Lake

The Jet d'Eau, in Spanish called the giant jet of Geneva, this impressive jet of water. It is the main symbol par excellence and an icon of tourism in this metropolis considered the smallest on the planet. Located in Lake Geneva, also known as Lake Geneva. It is one of the largest sources of water in the world, this jet reaches up to 140 mts. high. This is what allows its visibility, from any point of the city; its current location dates from 1951.

A space that is in sight and we can not fail to admire is Lake Leman is full of many stories, with its 72 kms. long, 14 wide and about 309 mts. deep. On the right side of Lake Geneva, large hotels and restaurants dominate the scene. On the left bank we find the old town, which leads us to the center of Geneva with its shopping area.

Another of its quite attractive destinations, which your eyes have to see, is the Salève mountain, very close to neighbouring France. To five minutes the cable car elevating the visitors to approximately 1.100 mts. Being able to enjoy a spectacular view of the city, the Alpine mountain range, the Jura and the Montblanc.

St. Peter's Cathedral is a small Protestant Cathedral belonging to the Swiss Reformed Church. Its origins date back to the 12th century. Specifically between 1,260 and 1,289. Its construction includes an eclectic mix of styles ranging from Gothic, Roman and Neoclassical. It is located in the heart of the historic centre, very close to the Bourg de Four Square.

The Wall of the Reformers, with its four gigantic genuine statues representing Calvinism such as Calvin, Farel, De Bèze and Knox. Park of the Bastions, this gigantic park is a perfect meeting place for perfect leisure and walking. However, what makes it most famous is the Wall of the Reformers, curiously, near this park, we can find the one they proclaim as the longest bank in the world.

The botanical garden of Geneva

On the banks of Lake Geneva, we are presented with the Anglais Garden, a beautiful park where the National Monument stands. Two women representing Geneva and Helvetia and next to the Clock of Flowers of the biggest of the world and with more than 6.000 flowers of decoration. The Botanical Garden of 1817, this garden contains thousands of plants from all continents, ponds, aviaries and an endless number of exotic animals. Switzerland's Far East has a lot to offer. At the Grand Théâtre de l'Opéra de Genève, a masterpiece of architecture as a historical legacy. Internationally renowned and famous artists are presented there.

The Palais des Nations is located in Ariana Park. It is accessed from the Place des Nations, the second main seat of the UN.

To delight the view another option are the Museums among which stand out. The Museum of Modern and Contemporary Art, also called El MAMCO, is the important museum of the city that stands out for its great cultural offer. La Casa Tavel, Museum that inherited the name of the family that inhabited this house in the 15th century. The Museum of Art and History has around 6,000 works houses one from the Renaissance and an important sample of great painters from around the world and in the same order. The Patek Philippe Museum, the Clock Museum, with a private collection is one of the most extensive and important of the subject matter and great references. You can also visit the International Museum of the Red Cross and Red Crescent, which provides information on the work of these humanitarian organizations.

So the table is set so that you can have the luxury of enjoying the great tourist attractions that Geneva Today has to offer.