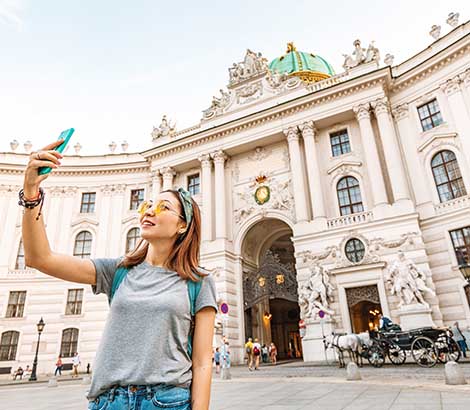 More than 8 Million people call Austria their home. Sociable people who generally tend to be relaxed & enjoy exploring outdoors as much as the good old cup of coffee in a café. We'd like to show you how your Austria tour could look with beautiful Instagram images taken by travelers from all over the world. First visiting Vienna and its splendid sightseeing's over to Salzburg, the birthplace of the infamous Mozart. Lastly, we visit possibly the oldest mining tunnels in the world.

Our Austria Tour Through The Imperial Traditions And Its Stunning Architecture

Vienna is the capital city of Austria for almost 100 years now and is Austria's cultural, economical and political center which is partly inscribed as one of the UNESCO World Heritages. It  is well-known for playing an essential role for European music and therefore is also known as the City of Music.

Located in Vienna, Schoenbrunn Palace has been existing now for over 300 years and is attracting over 2,600,000 visitor per year. Being that old, it is reflecting the aspirations, interests and tastes of the successive monarchs in that palace. It's truly filled with a rich history and a must-see on your Austria tour.

Mostly referred to as the Museum of Fine Arts, it is luxurious building enthroned with an eight-sided cupola. It is accessible for the general public with a primary collection of the Habsburg, including but not limited to, the portraits and armor of Ferdinand of Tirol, paints of Archduke Leopold Wilhelm and the collection of the Emperor Rudolph II.

The Vienna State Opera is one of the busiest in the world. It's producing 50-60 operas per year with ten additional ballet productions with more than 350 performances. Over 1000 people are working hard to keep the show running at the Vienna State Opera.

Most people probably know Salzburg as the city where Mozart was born and the associated musical culture with him. Listed once as a UNESCO World Heritage in 1997, it has a well-preserved city centers with a baroque architecture.

Located in the Old Town area of the city, this church had to be rebuild many times. Be it a lightning strike in 842, a fire in 1181, a complete rebuilt in baroque style or the bombs of World War II - the Salzburg Cathedral never got completely destroyed and has been holding his place since 774.

The infamous Hagenauer House of the Mozart's birthplace in 1756. It is a magnet for Mozart fans all around the world and definitely a must-see for every single visitor of Salzburg. It displays original certificates and letters from Mozart's life in Salzburg including portraits of Mozart drawn of him during his lifetime.

Located in the state of Upper Austria, Hallstatt is famous for mining salt dating back to the Early Iron Age in 800-450 B.C. Salt was a valuable resource back then and therefore the region was historically very rich. Nowadays you can take a tour through the world's first known salt mine with a total tunnel length of 65km (40 miles).

Located in the western Austria and northern part of Italy, it is famously known for the greatest ski resorts you can find anywhere. Stunning views of valleys and hiking paths along the lakes make this province definitely a must-see.

Most people will associate Christmas markets with Germany but lets give the point to Austria here. The landscape and the higher change to have snow during the December time make Austria the perfect place to start celebrating towards the festive Christmas times with loved one's

Either you love skiing, hiking or like history - every traveler can have a great experience in Austria. If you have decided to go travel soon, then grab your own Pocket WiFi for Austria. Maybe you are planning to visit more countries in Europe, then our Pocket WiFi for Europe is the right choice for you! Staying connected to the internet has never been easier!