What Is 5G? Everything You Need To Know 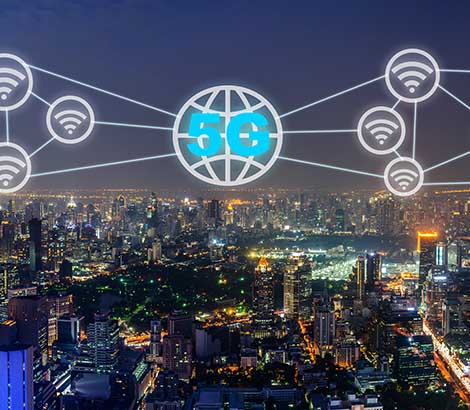 You might not know it yet, but we are slowly moving towards a new digital era. Mobile internet plays an important role for our nowadays fast-moving, modern life. It all started with a simple voice call back in the day.

Then came SMS and MMS (which never found its ground, especially with the popularity of WhatsApp 'shortly' after). Few years later, 3G was introduced along GPRS, which enabled the mobile internet that we know nowadays. 4G’s launch just drastically improved the connection speed, but we already have the need for more speed. So what comes with 5G WiFi?

It will have a much wider impact than you might think now. It will be an information network connecting future delivery drones, self-driving cars and trucks, VR headsets and millions, if not billions of other internet-capable devices inside and outside your home. As early as 2020, we can expect for 5G to launch.

Essentially yes, 5G will be just what you think it will be! It will be much, much faster than 4G. The only existing problem right now is that the industry has not agreed on it yet ‘how’ fast it should be and on what frequency level it will be on working. It’s an important criteria to build standardized systems around the globe.

The industry leaders are too focused on fabricating their own technology instead of agreeing to basic standards. The general agreement targets a (r)evolution. All existing and future technologies must work together hand in hand while being super fast with a low latency. You think your internet at home is fast?

The 5G on your smartphone will beat you to it. It has the chance to completely replace WiFi networks. Supposedly, it will be 10x faster than the current 4G LTE with insanely low latency. This low latency rate is important for the future IoT’s (Internet of Things). You want your self-driving cars or drones to react instantly to any given, maybe even life-threatening situations.

How Does 5G Work

Why can’t the industry leaders come to an agreement? There is still a lot of research & development ongoing regarding the frequency levels used for 5G. 4G runs on low-frequency with the advantage to get around buildings and walls easily. Those waves can also travel far distances important for the possibly required infrastructure.

4G does not require that many antennas for a nearly perfect coverage. Planned 5G WiFi networks will run somewhere around the 30GHz & 300GHz frequency. These high-frequency waves require many, many more antennas to cover the same area as 4G currently.

That’s why the companies are testing different frequency level for the same result to reduce their future infrastructure expansion. It is still early days for 5G WiFi.

Do I Have To Buy A New Smartphone

There are still a few years left, before 5G will reach the same coverage as 4G, but yes. Until then you need a new phone that will be capable of receiving 5G high-frequency waves.

How Long Until 5G Will Be Released

A few years more! Industry leaders are targeting 2020 for an extensive launch. To be honest, that seems very ambitious as we are looking a huge infrastructure changes and new devices not targeting smartphone but rather cars, VR, drones and home automation.

The success of 5G will highly depend on how all the internet-connected devices will interact with each other. The biggest challenge uprising is the amount of spectrum needed. There is a set amount of radio frequencies allocated only for the mobile industry.

The greatest amount possible has to be enabled to the mobile industry as a priority. Available at a price affordable to every company to still invest and further innovate. The spectrum needs to be placed in the high-frequency range. Already permitted for 5G WiFi usage has been the 28GHz band in the United States which is also being worked on in Asia.

If this band will be used, the global adoption will greatly fasten up. The European Union has already agreed on using the 26GHz band, which requires the same equipment as the 28GHz band in USA and Asia. The only existing problem is that the 26GHz band is already congested.

2020 seems to be the goal for 5G. It might happen even faster than we think if the test-networks in many different countries will work and the government regulations will either allow the band range for usage or maybe even free up some 2G spectrum space for future 5G,

5G will be the biggest era of communication.

If you want to enjoy the freedom of 4G and its capability of worldwide roaming, then My Webspot is the correct place for you. We offer you 3G/4G Internet in over 100+ countries at a fixed price. Save up to 95% on roaming costs with conventional solutions. Click here to see our coverage!