What to see in Rome 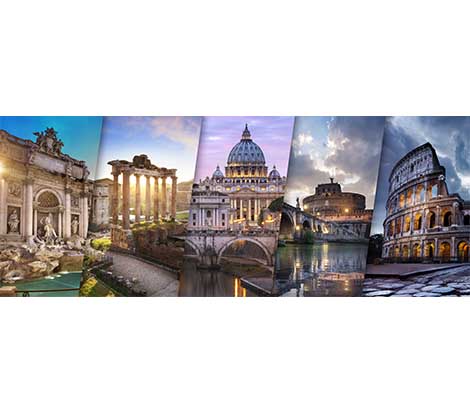 Are you going to stop in the Eternal City during your trip in Italy? To enjoy the historical richness of this city, My Webspot's pocket WiFi is the perfect travel companion. And for those who want to see exceptional things, here's a list of wonders you need to see in Rome.

What to see in Rome: The Eternal City

L'Urbe, Città Eterna or the Eternal City or simply, Rome. A history with more than three thousand years, which at one time became the owner of the Mediterranean and half of Europe and the Middle East, who is credited with the most unjust Judgment and Death in all history, the crucifixion of our Lord Jesus Christ and the bloodiest persecution of Christianity in the first centuries I to III A.D. The capital of the most bloodthirsty, warrior and atrocious empire that has existed in humanity, the most developed metropolis of Europe and the known world. Rome is the cradle of a civilization that has had the greatest influence in the rest of the world; in culture, arts, literature, language, architecture, philosophy, law, morals and religion.

Rome has a wealth of thousands of historical, artistic and architectural goods from all of humanity. The great Aurelian walls delimit its great historical center of more than three millennia. It is the highest expression of the historical, artistic and cultural heritage of the Western world known for its time. So much so that in 1980 Unesco declared the Historical City of Rome as a World Heritage Site, together with the Holy See and St. Peter's Basilica.

A millenary saying that all roads lead to Rome. It is really a reality, wherever you are, the historical spell of Rome invites you, envelops you and catches you. So much so that if there is a universal destination for all travelers, it always is and always will be Rome.

In all cities there is always talk of a historic centre, but in Rome exceptionally, the whole city is practically its historic centre. Rome is also a modern and cosmopolitan city, with modern buildings, large avenues and all the services of a typical 21st century city. For travellers to be in Rome is to live History.

For everything you need to see in the city of Rome, you must necessarily travel to it. Even if you are told and described everything it has to offer and even tell you the experience of what you can see and live during your stay in this wonderful city, it would only be a stimulus for you to immediately undertake your journey to the eternal city. A description would be absolutely nothing, compared to the great majesty of the charms of all those magical spaces, eternal and holy and not so holy that you can personally enjoy and feel in Rome. You will realize that when you step on the Roman soil you are really in the heart of the Empire; its streets, its monuments, its churches and that religious, educated and magical environment. It is really amazing, holy and daring, that transports you without permission to those experiences that happened here more than three thousand years ago.

What to see in Rome: A collection of picturesque views

A sunset in Rome, for example, is for many residents and visitors one of the best moments to be able to experience that enchantment that transports you to your millenary ancestor. Being a kind of combination of history and color, it is the moment where the blue sky is tinged with the sunset, along the Tiber, giving you the feeling of being in the presence of a crown of flames on the Basilica of St. Peter. Mirage or vision is worth living, since the experience of its beauty, its magic and the celestial are overwhelming, that missing it would be a sin.

The eternal city offers you many spectacular views, such as the beautiful Pincio Gardens, above Piazza del Popolo, with the background of its buildings, monuments, palaces, alleyways and of course most of the domes of its gigantic historic center, highlighting as evident the famous and historic St. Peter's Basilica. In this romantic sunset in the Roman sky, the indigo color takes over the city giving way to the night after a flight but magical sunset. When the evening falls in Rome you are silently immersed in the charm of the range of colours that surrounds the city, which you will want to observe every day.

In today's Rome, you don't see gladiators fighting in the sand with other warriors, lions, cavalry and foot soldiers in the characteristic suits, capes and emblematic helmets of the world's most powerful army. But they are perceived with the soul, those scenes are recreated in our minds between light, dark and gray, only it is enough to observe around us many of those famous sculptures, statues and commemorative monuments, elaborated of stone, bronze and others to our step for the city and the more we enter their historical places more realistic becomes our imagination.

To speak of Rome and not to mention the appreciation and admiration that the Romans have had for the water would not be fair. This city had its own systems of water supply and irrigation for the crops, even for the ornament of the city were very careful with the maintenance of the greenery and colorful of their gardens.

In the romantic evenings of Rome, the Tiber seems to increase its flow and its transparency that allows to discover the coins thrown to the bottom of the fountains by the inhabitants and visitors grabbed of desires, like the Fountain of Trevi. A sculpture of Neptune next to the Abundance and the Health guided by the newts, who observe us from the fountain. Other important fountains such as Piazza del Campidoglio and Piazza della Rotonda, by Giacomo della Porta. They accompany the Pantheon, one of the monuments of greatest grandeur for the Empire.

The entire Historical Centre of Rome remains active even after dark. In La Navona and Campo dei Fiori, clowns, jugglers, puppeteers and countless street artists are set in scenes to delight the thousands of passers-by who visit these spaces. For example, in Spagna, with its stairs, terraces, restaurants, cafés and bars crowded with night spectators, something very typical of Rome. It is marvellous to enjoy the Italian capital and its open-air nights, as most of the year Rome guarantees a very good climate.

The stages and characters of Rome are World-wide

Walking through the illuminated ruins of the Forum and the Coliseum of Ancient Rome will surely generate such incredulity that you will have to tell someone to take a photograph of you from those who imprint the date to realize that you are there and to have a testimony that was not a dream and that you are personally appreciating one of the world and metaphorical icons of the fall of the Roman Empire, that has undoubtedly been the largest and longest in the world and that we can still contemplate its eternal and immutable traces that have survived invasions, fires, bombings, wars, earthquakes and the mistreatment of time. All these great monuments such as the Colosseum itself, the Piazza Santa Maria in Trastevere, see their inhabitants moving on foot, like eternal silent witnesses but with much to tell even if it seems paradoxical.

Rome maintains this legacy not only with its historical icons of its Great Empire; not only by its strength, but also by its nobility, to be the Capital of one of the Faith that very contrary to the Empire that did it by force, this the New Empire but of love and humanism that marked a man called Jesus of Nazareth and that was founded in Rome, in one of its closest followers the Apostle St. Peter, for that reason Rome presents its two faces, that of the strongest Empire in the world and that of the noblest empire; Christianity. The first sought domination through death and domination by force, the second through Love and Peace, seeks that all reach Life, so is Rome in the most essential, Strong and Noble.

All generations throughout these three millennia have witnessed its greatness, its great constructions, all of exquisite beauty, regardless of the wear and tear or corrosion that the passage of time is leaving us no matter how decadent it may seem on occasion.

A jewel of world heritage

Rome as a world heritage site, endorsed by Unesco. It sums up the history of the whole of Europe. In it civil engineering developed the technological advances of the Empire and that today are the guides of modern architecture, but also include great artists such as Rafael and Michelangelo the Baroque Bernini, Bramante, Carlo Maderno and Borromini. There are other celebrities such as the Popes who have succeeded each other since the time of St. Peter and Constantine, who have also influenced the aesthetic, artistic and religious beautification, giving Rome all the majesty that must have the cradle of Christianity. Not to mention villas such as Borghese and Pamphilj.

Although your religious preference is not Catholic and even if you are an atheist, you have to stop to walk to St. Peter's Square and Basilica, because the sensation you will feel is inexplicable. Its lofty artistic beauty is of such magnitude that to explain it in words would be an extraordinary effort. So if you see Rome remember that you are living the Roman Empire, because Rome has many things to see and between them you will see its history.

Now that you know everything about what to see in Rome. We wish you a safe journey in the Eternal City.