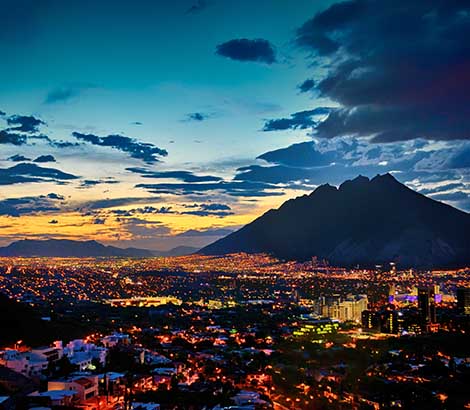 In 1915 the super luxurious Gran Hotel Alcirain Monterrey, hosted the mythical revolutionary Pancho Villa for 11 days. And they hosted its horse too. Yes. Pancho loved his horse so much that he also asked for a room.

We all want the best for our loved ones and you can find only the best in Monterrey. With a magnificent economic and industrial development, the city of the state of Nuevo Leónis a very modern metropolis. Also considered one of the happiest cities in the world, it has hundreds of attractions that tourists tend to ignore.

You are bored of conventional tourism. Your thing is the dynamism and modernity of the city, Monterrey can give you a totally different and refreshing experience. Therefore here is a small list of places that will change your perception of tourism and this majestic concrete jungle.

Who said industries can’t be ecological?

The boom of industries has been the subject of controversy from its inception to the present. Ecological groups, industrial groups and governments have clashed to defend their own visions. There was a time when finding oil was considered so bad omen wives could leave their husbands for it. Fortunately, Monterrey was able to perfectly combine the greenery of nature with the iron industry in the famous Fundidora Park.

The Museum of Site of Industrial Archeology has more than 140 hectares, lakes, fountains, green areas and museographic pieces. Its objective is to demonstrate the conservation of nature and the multi functionality of industries can live together. Here you can enjoy several of its structures such as the Oven Museum, the Steel Museum and the Arts Center. It has a photo library, a cinema, a library and a magical theater. There is also a research center and the chimneys are a beauty that deserves your attention.

This park also has several restaurants such as El Lingote, with a gastronomic concept that goes between the cosmopolitan and regional. Its guacamole is simply succulent and the view you will have of Monterrey will leave you wondering. The restaurant Tenerias stands out for the simplicity of its atmosphere and the sophistication of its cuisine. Try the tacos gobernador and the banana pie. Delicious! Do not forget to visit its ice rink, ride the wheel of fortune and photograph the Echo Serpent sculpture by Matías Geôritz.

It is immense, with giants and heroes

The Macroplazais the fifth largest square in the world occupying forty hectares and is really impressive. It has beautiful green areas, large recreation areas that leave countless activities to do and have fun.

Among the structures that make up this immense square stands the Explanada de los Héroes. Located just in front of the Government Palace, there are four monuments that honor the national heroes Hidalgo, Juarez, Morelos and Escobedo. You can also enjoy the Sunken Gardenwhere you will admire beautiful sculptures such as La Juventud de los Niños. It's a pretty modern style.

Do not forget to delight yourself with the Fountain of Neptune. It makes a direct allegory to the construction of the hydraulic plan to supply the city. It is quite elaborate, presenting Neptune in a horse drawn carriage, a child holding a fish and another with the horn of plenty. There is also the sculpture of a woman riding a lion among others. It deserves long minutes of rapture. If you want to have a fantastic view of the city, go up to the Trade Lighthouse and take many photos.

A waterhole is a natural source of water that springs from the ground or rocks ant it seems an eye. Monterrey was built around the eye of water of Santa Lucia, who curiously is the patron saint of the blind ones. From that waterhole was built a huge artificial river and is a marvel.

The Santa Lucia Channel connects Macroplaza, La Fundidora Park, the Museum of Mexican History and the Museum of the Northeast.It contains many green areas, pedestrian paths, commercial areas and sculptures. Along the walk you will find 17 illustrative plates where you will learn the history of Monterrey. It has 22 fountains, 10 bridges and numerous restaurants and shops that make it a cosmopolitan, lively and busy spot. Do not miss the sculpture La Lagartera, it is quite original, curious and rich in details.

It is important not to waste the opportunity to know several of the artistic jewels that Monterrey treasures. As its Metropolitan Cathedral that has a spectacular Baroque style and if you love architecture, do not miss it. You must also visit the three Basilicas. Guadalupe, Nuestra Señora del Robleand Purisima.

The Basilica de Guadalupe has a very modern and avant-garde style and is glorious the December 12th. It is the day of the Virgin of Guadalupe and the pilgrimages are spectacular, full of serenades and mariachis. The Basilica de Nuestra Señora del Roble has a beautiful colonial classic style. The Basilica La Purisima is the most daring of them all. It has a modern, industrial and austere style that fits perfectly with the industrial advance that characterizes Monterrey.

Do you love museums? You can visit the Museum of Mexican History. It is an imposing and modern structure and contains an extensive collection that goes from pre-Hispanic art to an impressive locomotive. The Museum of the Northeast is designed to go through it downhill as a tunnel of time; The Palace Museum stands out for its majesty and its historical value.

Monterrey is a modern metropolis, so you can not miss the Museum of Contemporary Art. It is a treasure. Nothing else in its entrance you will delight with a beautiful sculpture of bronze of six meters of a pigeon. Its rooms are designed to use the natural and artificial light, the museum structure is an art in itself. Its purpose is the dissemination of Latin American arts.

Now that you know more about the Sultana del Norte, you only have to acquire the best possible technology. My Webspot offers mobile WiFi in Mexico. You can use to remain connected everywhere and anytime in Mexico. Then you can use your apps to find all the places we have mentioned and post your photo from the chair of Monterrey. Everything you need from the internet. This is a tool that will undoubtedly help you relax and taste a cabrito or dulces glories.

Another place that you surely want to know is the legendary hillLa Silla. It’s a beautiful protected natural area for being home to numerous species of flora and fauna that we must respect. It has numerous caves and you can appreciate the flight of the bats that is really impressive. There is a legend about the bandit Agapito Treviño, who was considered as the Robin Hoodof Monterrey. It is said that he robbed the rich, making them undress and dance while he played his harmonica. Everything he stole is hidden in the Boca Cave, on the hill La Silla. The legend predicts that whoever finds his big booty and spends it on himself, will go crazy. Scary!