The best activities in Amsterdam 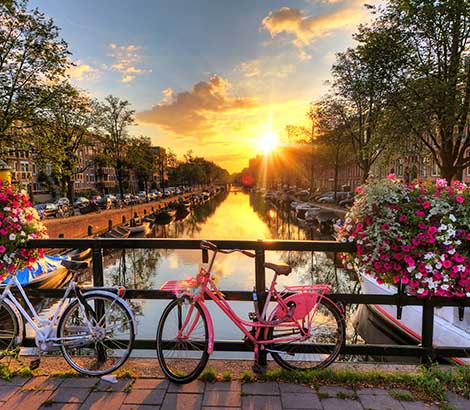 Amsterdam owes its name to the fact that a few daring sailors a thousand years ago came across the Amstel River to a land of swamps and marshes. The first dam was built where today is Dam Square which means dam, in Dutch.

These Aemstelledammers became famous boat builders and expert brewers, who were practically the first settlers of Amsterdam, one of the first cities in the Baltic Sea, which by 1320 had already designed the first map of this city.

The magic that intoxicates us of splendor and that we observe in Amsterdam, directs our looks to its numerous and extensive canals and bridges, a very valuable relic of the architecture that was developed in Europe during the XVI and XVII centuries in a country that has very little surface and that we could hardly observe in another country of the World.

The works of famous artists such as Rembrandt and Van Gogh can be admired in the Museums of Amsterdam and also walking through the city that offers us a history that is felt and felt in one of the urban centers catalogued as one of the most beautiful, romantic and most impressive cities in Europe and the World.

The history of Amsterdam is marked and closely linked by the cultural, autochthonous and a sense of belonging of the inhabitants of the Netherlands, thanks to the legacy of its first settlers. For example, the colour Orange, with which the Dutch identify the Lowlands and which always arouses much curiosity in locals and strangers since the national flag of Holland has a horizontal tricolour composed of red, white and blue. The fact that the city of Amsterdam and the whole country in general maintains its orange iconography, is due to the fact that the Royal Family is a native of the House of Orange Nassau, the Dynasty of Willen Van Orange and as Orange in Dutch means Orange Orange this color is not only a symbol for the country, but also support and reverence to the Royal Family.

In national celebrations apart from the three colors of the official national flag, there will always be an orange stripe adorning the same flag and the streets with this unique orange color. In all the celebrations of the Royalty and especially in the day of the King, it will be seen in Amsterdam the tricolor flag with an orange strip, in addition to the Vivas and Cantos Holandeses. "Oranje boven, oranje boven Leve the Koning", which in Spanish would be something like; "Arriba Naranja, Arriba Naranja, Larga Vida al Rey! The national soccer team is also known as the Mechanical Orange in honor of the color that pays tribute to the royal family. It's common to see the local stadium completely orange, because fans wear orange to support their team.

A city full of museums

Amsterdam is a city full of monuments and exceptional places both for its history and beauty, well known for the beauty of its historic area and for its development that is constantly growing.

DAM Square is Amsterdam's main square, located from the former Amstel dam, around this square was developed the city of Amsterdam. Here you can find the obelisk, the National Monument that identifies its name, the Royal Palace and the Museum of Madame Tussauds. The characteristic that defines and identifies Amsterdam are its canals. The almost 75 kilometers of canals that are part of this city, are its main attraction, in addition to its bridges, houses, cafes, to navigate and enjoy their spectacularity, being able to appreciate how life develops outside and inside them. Another attraction that you should enjoy are the famous and characteristic houseboats, anchored in its docks and that constitute a luxurious attraction more for its occupants.

An attraction that attracts much attention to travelers that you can visit within the red neighborhood the famous Museum of Sex. In Amsterdam they hide nothing, and thousands of tourists visit every year. The VAN GOGH MUSEUM houses one of the world's largest collections of Van Gogh's works. This exhibition follows the creative evolution of Van Gogh, from 1880 to the end of 1999, the museum an elliptical space work of Kurokawa. RIJKS MUSEUM has the characteristic of being the largest in the country. With the most important collection of Dutch art of the seventeenth century. Around seven million works make up all its rooms.

In Amsterdam life moves all the time

The BEGIJNHOF is a living space for the Beguinas, a congregation of laywomen. It is a large very green park with very elegant houses, away from the modernism of the city and was founded around 1,346. The Basilica of OUDE KERK, built in honor of St. Nicholas, patron saint of Amsterdam built in the Gothic era of art, which you can visit in the Red Quarter, you can still see many of its historical riches, such as its exquisite polychrome stained glass, paintings on the dome and a large organ of his time.

BLOEMENMARKET or MERCADO DE LAS FLORES, is the preferred place for Amsterdamers to purchase all kinds of flowers and plants. It works as a great nursery for the production of ornamental plants and flowers, since 1862 on the banks of the Singel Channel, being a floating platform made up of barges. If you want to buy the famous tulip bulb to take as souvenir or souvenir of Amsterdam this is the perfect place.

There are other places in Amsterdam, such as the famous Casa Flotantes, on the banks of the canals, the Coffee Shops that are local where marijuana consumption is allowed freely. Spui Square, one of the most famous squares in Amsterdam. Leidseplein, street artists, theatres, restaurants, bars, and even the Amsterdam casino operates there. Vondelpark, Amsterdam's most visited park.

And to end your stay in Amsterdam, LA FABRICA HEINEKEN is the Heineken beer, the most famous beer in the world. The original brewery of this famous beer was built in 1867 and was active as a brewery until 1988. In this tour, you will learn about the history of the brand, its founders, the secrets of the brand formula and the great advertising history of the brand. Children under 18 must be accompanied by an adult.

Amsterdam will be waiting for you with open arms, as a single visit is not enough to get to know and continue enjoying the attractions and the warmth of its people. Enjoy the internet during your stay with My Webspot pocket Wi-Fi.