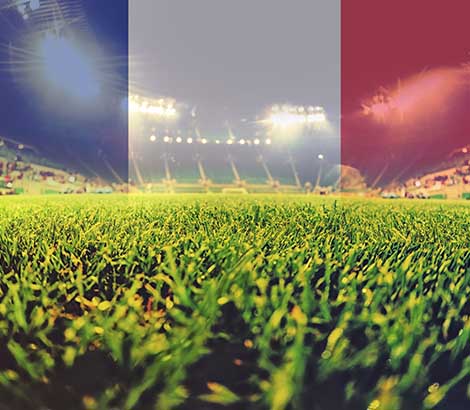 June 10th of this year will mark the kick-off of the next European competition of Football. During 1 month, France will welcome the best Europe's and World's players to throw in the title of Europe’s Champions, detained by Spain. You can find all the UEFA's information on the official link: Euro2016. To the meeting of this tournament at the summit, the French stadiums gets ready to receive uncountable supporters in the colors of their countries. On this occasion, many of you will engage themselves to a trip on the French lands, between Paris, Toulouse, Nice, Marseille, Lyon or still Bordeaux. We propose a guide special Good plans Euro 2016 for all the itinerant supporters.

Imagine, the 2 respective team’s supporters, and all the football’s partisans gathered in the same place,at the same moment, and looking for an accommodation: difficult to imagine that all the hotels, hosts' houses or the youth hostels can open their arms. In this case, the best solution is to rent particular apartments. By living in the inhabitant's, you offer yourself the possibility to live near the stadium, but also to be totally autonomous and specially to live the tourist experience in the inside. You can benefit from the comfort of the house and depend only on yourself: the ideal for most party people of you, who shall return certainly in the early hours, after their favourite team’s victory. For that purpose, here are the best addresses, such as Airbnb, Homelidays, Housetrip, ou encore Wimdu. This solution is economic and insures you a matchless comfort: don’t wait anymore!

Remain connected to miss nothing

During 1 month, you will owe to remain on the lookout for any information, all the scores, all the yellow cards distributed, but also all the players who sprained themselves their little finger. It’s difficult when you wander from a place to another, especially when the routes are long and when you take the cross zones where there isn't any network available, even GPRS...Then, to don’t miss any occasion to be more informed than the others, nor to be even able to forecast in a extremely precise way, we invite you to opt for the Wi-Fi cases My Webspot, from 6,40€ per day, which offering you an optimal connection and a broadband 4G LTE, wherever you are. On their site, you'll find all cases which will accompany you, since your room rented (sometimes without WiFi), until the route by train without network nor connection. You are certain to become the encyclopaedia of the tournament, thanks to your case!

Do not ruin yourself in transport

To go to the various stadiums which shall welcome you during the Euro, you will risk certainly chain transport’s hours from city to another and “zeroes” can add up very fast at the end of this intense month.If you planned long travels such as Marseille-Lille, favour the train by taking your tickets as soon as possible and by opting for an order in several.Even you are 10, 15 or 30; travelling towards to the same stadium, don’t hesitate to order in one step to save up at the most! However, the most economic offer but still little used is: the bus journey. Numerous companies propose special routes in honor of the euro and guide you from stadium to another for hardly 15€! In another hand, you can prefer to travel by ride sharing, for exemple the most common is Blablacar . Finally, for the shorter travels, Uber is the greatest and most economic solution: the principle is to ask the nearest private individual conductor registered in the application, to drive you where you want, at low cost.

Do not stay in stands: go out!

On the occasion of the Euro 2016, France opens its doors to offer you an outstanding show. Because yes, beyond the major matches, other events take place in honor of this competition. On June 9th, from 8:55 pm, the Eiffel Tower invites you under its cobbler's lasts to propose you an immense “Opening Show”!To the program, find: Will I Am, Louane, Christophe Maé, Florent Pagny, Kendji Girac or Soprano. From 23 hours, the international DJ David Guetta will have for mission to put fire on the Champs de Mars’s lawn, by proposing a concert in the Friend Zone which will welcome all the Parisian supporters during the Euro. In another hand, you can also take advantage of a new experiment, realized to measure for the Euro’s supporters: The Train of the Euro. This train proposes you 4 cars with themes: Trophy, History, Studio Watched and FFF’s Mascot, on 80 m of length. You can otherwise participate to Fifa’s tournaments in the 15th district or admire the Buttes Chaumont inflamed in the colours of the Euro! Find more informations and other events on our article : What to do in Paris?.