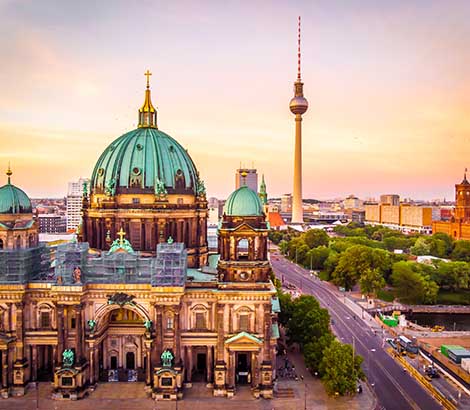 The great German capital awaits us to tell us its great story, after being brought down during World War II and having lived through a disastrous inhuman separation with the Wall that separated entire families for 28 years for ideological reasons, knowing it personally will be one of the best experiences that will make you return to Berlin today,

The splendid modern architectural landscape, which we appreciate in Berlin creates such a special atmosphere with a classic-modern mix, where the extravagant becomes everyday and vice versa.

Even the remains of the Wall are part of the landscape of the City, as a witness of those times of anguish and division, concentration camps, an exacerbated fascism and bunkers of terror that in the past were its worst nightmare but that today invites us to life and freedom; to the enjoyment of this Imposing European City.

What you can never miss in Berlin is its history.

In Berlin there are many tourist attractions and different historical places to visit, within which stands out for its many attractions the Museum Island. The Museum Island (Museumsinsel in German), is a peculiar island where there are a good number of museums that are of great importance and enjoy considerable popularity, being one of the places that receives more visits Berlin today.

The initial idea of this place was given by King Frederick William IV of Prussia in 1841, who wanted to create a neighborhood dedicated to art and science, which to this day occupies the entire northern area of the island. The Old Museum of Berlin (Altes Museum) as its name indicates, this is one of the oldest museums in Berlin; it was built in 1828.

The new Museum (Neues Museum), behind the Old Museum, was completed in 1859, was almost destroyed during the war where only some of the outer walls were left and whose recovery took place in 2009 retaining the remains of the old building and respecting the structure of it.

The Alte Nationalgalerie from 1.876, also according to August Stüler's designs, to house the 19th century art donated by the banker Joachim H. W. Wagener. The collection was expanded significantly and today is one of the largest collections of sculptures and paintings of the nineteenth century in Germany, housing the paintings from the collections and sculptures, in the nearby Friedrichs werdersche Kirche, a neo-Gothic church.

In 1904 the Kaiser-Friedrich-Museum, today called the Bode Museum, was opened in the north of the island and easily recognizable due to its copper brown dome, the Bode Museum was closed in 2000 for reconstruction and reopened on 17 October 2006. The last of the museums is the Pergamon Museum, from 1930, whose buildings retain their original size, such as the Pergamon Altar, the Ishtar Gate of Babylon and the Miletus Market Gate. Berlin keeps in every corner of its territory an infinite number of historical monuments that marked all its inhabitants, as well as the entire country.

The Victory Column, with four bronze reliefs showing the three wars and the march of the troops in Berlin. The Holocaust Tower next to the Exile Garden makes up the Jewish Museum in Berlin, whose official name is Josef Hoffman, with its 49 pillars that symbolize the founding year of Jerusalem.

The Berlin Wall (Winken ueber die Berliner Maue) or Wall of Shame, as it is also known, raised intra-German border, remaining standing since August 13, 1961 separating East Berlin from West Berlin and the Democratic Republic of Germany, until November 9, 1989, when it was demolished, seen and applauded by the entire world giving final end to the Nazi holocaust, and a historical fact of universal significance.

The Brandenburg Gate is one of the emblematic symbols of the city of Berlin, a historic monument that every year attends from officials and politicians to tourists and visitors. Berlin has among its monuments one peculiar and at the same time special, this is the famous Fernsehturm (in German, TV Tower) a TV tower located in this German city.

The Berlin Cathedral (Berliner Dom in German) temple of the Evangelical Church in Germany, appreciated as the most beautiful church in the city of Berlin; The Kaiser Wilhelm Memorial Church recognized by the Berliners as Gedächtniskirche, located in Breitscheidplatz Square and has been declared a protected monument, like the Church of St. Nicholas with almost 800 years of erection and despite the diversity of problems that arose in the history of Germany, could be preserved and admired until these days.

The Parks of Berlin, keep a space of extensive and green fields, where the inhabitants and visitors can rest and have a moment of relaxation. The Tiergarten Park is the main park of the city of Berlin, Germany, in the center of the city, is also since 2001 a district of this city.

The Berlin Zoo is undoubtedly one of the best spaces to enjoy with the family, besides being one of the largest in Germany, has the largest and greater variety of animal species than other zoos in the world.

For many years Las Plazas were the scene of important events in the city, today are a meeting point for people who walk the streets of the city. Potsdamer Platz, was the busiest squares in Europe, was in a shopping area and cafes, was also the site where the first traffic light was installed in Europe. The Hackescher Markt is a square in the area of Mitte, in Berlin, used to be a market. Alexander Platz (Berlin Alexander Platz) is a large square located in the central area of the city of Berlin, this square originally housed a cattle market, it was known as ox market or Ochsenmarkt.

One of the most active capitals in Europe.

The Bellevue Palace, one of the most recognized places in the world in the city of Berlin, located on the banks of the Spree. The Reichstag Parliament is the symbol of the German capital and the seat of the German Parliament.

The House of World Cultures is the main non-European art exhibition centre located on German territory. Also known as a promoter of events such as dance, theatre, cinema, fine arts, performance and music, all developed artists from all over the world.

Unter den Linden, which literally means, Under the lime trees, an important boulevard center of nightlife. After the Second World War it was separated in the eastern part of Berlin, after the fall of the Berlin Wall, it returned to be one of the main streets along with the Kurfürstendamm.

For all there is to see and enjoy in this historic country, which rose from the ashes of war to become one of the world powers of the moment, you should visit this great city, so that you feel at first hand the fighting spirit that you breathe in Berlin Today. Enjoy it with My Webspot's pocket WiFi for Germany.